VELUX Group CEO to retire at end of 2017 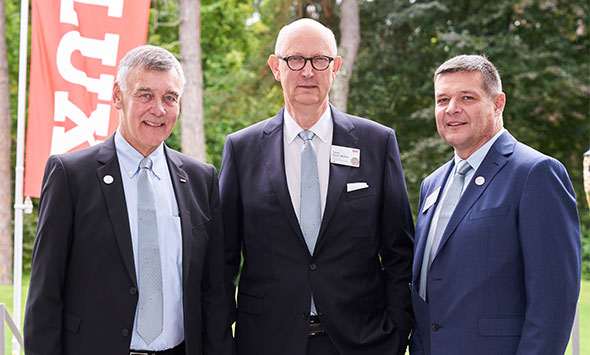 On the last day of the VELUX Group’s strategy conference, held every four years, Chairman Søren Bjerre-Nielsen announced to the 120 members of the company’s global management that, after 17 years as CEO for VELUX A/S, Jørgen Tang-Jensen is to retire at the end of 2017. He will be succeeded by 52-year-old David Briggs from the UK, who has worked in the Group since 1991.

Together with the owners and Board of Directors, we have been planning for Jørgen's retirement for some time so as to best ensure the company’s continued positive development. I am very happy to say that we have achieved that in every possible respect,”

says Søren Bjerre-Nielsen, Chairman of the Board.
„

“Jørgen will hand over a business that is trimmed for growth and run by a very strong management team.”

Jørgen Tang-Jensen has worked in the VELUX Group for his entire career. He started in 1981 as Manager of accessories, blinds and roller shutters and became Sales and Marketing Manager in 1989. Since 2001, he has been CEO of a company that today operates all over the world, with own companies in more than 40 countries and a strongly established position on its market.

It is my duty to hand over the keys in an exemplary fashion that gives my successor the best possible conditions to continue the company’s progress,

With VKR’s 75th anniversary in 2016 and records in both turnover and profits under his belt, Jørgen and his team recently presented the strategy for the next four years to global senior management at a conference in Flims in Switzerland.

Søren Bjerre-Nielsen also took the opportunity to thank Jørgen Tang-Jensen for his great dedication and the excellent results he has consistently produced over many years. “Jørgen carries VELUX in his heart and we will miss him both as a person and as a source of inspiration,” declares Søren Bjerre-Nielsen.

However, Jørgen Tang-Jensen will not be cutting all ties with the Group – he is expected to join the Board of VKR Holding A/S at its next AGM in the spring of 2018 and become a candidate for the board of VILLUM FONDEN, the foundation that owns VKR Holding, in 2019.

His successor, David Briggs, began his career in the Group in VELUX France in 1991 and was appointed General Manager for the UK only three years later in 1994. In 2001, he was chosen to start VKR Holding’s newly established alternative distribution channel, Altaterra, that was to service the low-price and private label segment of the market. He had great success with this venture until 2015, when he returned to VELUX A/S as member of the VELUX Management Group, responsible for Sales, Product Development and Product Management.

David’s long experience in VELUX and Altaterra has given him broad, international experience with both customers and our business,

“He has a very customer-oriented approach and is fuelled by a desire to raise the importance of daylight and fresh air in buildings. The owners, the Board and I look forward to following developments in how David develops the VELUX business for the future.”

I feel greatly honoured and more than a little humble to have been given the opportunity to lead this fantastic company. I feel a sense of great responsibility but also great excitement, and I am confident that we can achieve even better results in the future,

The changing of the guard in the VELUX Group will be marked by a goodbye-and-welcome reception at the Group’s head office in Hørsholm on 13 December this year.

For more than 75 years, the VELUX Group has created better living environments for people around the world; making the most of daylight and fresh air through the roof. Our product programme includes roof windows and modular skylights, decorative blinds, sun screening products and roller shutters, as well as installation and smart home solutions. These products help to ensure a healthy and sustainable indoor climate, for work and learning, for play and pleasure. We work globally – with sales and manufacturing operations in more than 40 countries and around 9,500 employees worldwide.The VELUX Group is owned by VKR Holding A/S, a limited company wholly owned by non-profit, charitable foundations (THE VELUX FOUNDATIONS) and family. In 2016, VKR Holding had total revenue of EUR 2.4 billion, and THE VELUX FOUNDATIONS donated EUR 155 million in charitable grants. For more information, visit www.velux.com.

VELUX Group CEO to retire at end of 2017