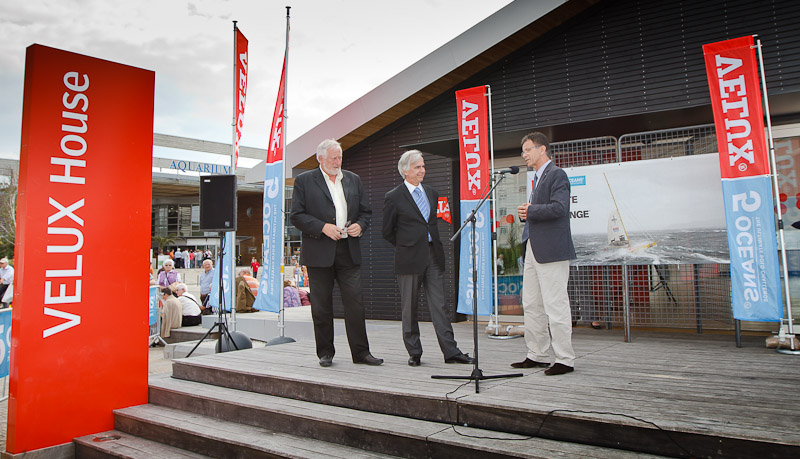 At the conclusion of the 2010-11 VELUX 5 OCEANS yacht race, the title sponsor is paying a special tribute to the city of La Rochelle from where the circumnavigation was fired off in October last year.

The VELUX Group is handing over a landmark of the first race village – the climate-friendly VELUX House, a vision for sustainable buildings of the future.

VELUX House was brought to La Rochelle especially for the start of VELUX 5 OCEANS 2010-11. Before that, it served as the official exit building for the COP 15 UN Climate Change Conference in Copenhagen. Here, all conference delegates were able to get a first-hand im-pression of how sustainable architecture and components can play an important role in tackling the challenge of climate change. As a centre piece of the race village in La Rochelle, VELUX House was an integral part of the exciting race start weekend in October last year when five skippers were sent off to race around the world alone.
Since then, the house has attracted a lot of people to the harbour front in La Rochelle. While some people visited the house to get an update on the position of the skippers from a large computer screen, others attended meetings or exhibitions arranged by the city. As such, VELUX House is fulfilling its purpose of being a 'lighthouse' for sustainable consciousness and solutions.
By way of a thank you for the city's support over the last nine months, the keys to VELUX House were handed over at the prize-giving ceremony at race finish. The gift was received on behalf of the city by Mayor Maxime Bono and presented by the VELUX Group in the per-son of Michel Langrand, President of VELUX France.
"It's almost magic. The house looks like it has been designed for this place, because it is so well integrated and it emphasises the fact that the VELUX Group and the city have a lot in common. In our Group we take responsibility for the climate by being conscious about CO2 emissions from houses in the future. The city of La Rochelle was the first to show concern about the environment in France – 30 years ago they were the first to offer free bicycles to the people visiting the city," said Michel Langrand.
The house was designed to replace the former closed roof construction of multi-storey buildings and to demonstrate how energy renovation of older apartment buildings can be achieved by utilising daylight and natural ventilation at the same time as minimising the use of resources – and thus CO2 emissions.
"This house has turned out to be exactly what we wanted it to be, kind of a window shop where we can show all the perfect solutions and contribute to improving indoor comfort thanks to daylight and fresh air," said Michel Langrand.
In La Rochelle, it will be a lasting reminder of the race's core principle of promoting sustainable actions. The skippers in the race have demonstrated their commitment to sustainability by making use of renewable energy sources on board, racing ECO60 yachts and communicating about the symptoms of global warming they have noticed in the oceans. Since 40 per cent of the energy consumption in the Western world comes from buildings, the VELUX Group has addressed the agenda by bringing solutions for future sustainable buildings into play.
-------------
Photo text 1: At the conclusion of VELUX 5 OCEANS 2010-11 president of VELUX France, Michel Langrand, (right) hands over the keys to the climate friendly VELUX House to the Mayor of La Rochelle, Maxime Bono (centre).
Photo text 2: After the hand over of VELUX house the city of La Rochelle served appetizers and drinks. Throughout the race VELUX House a lot of people have vistited the house to check up on the skippers' positions are attended meetings arranged by the city.
Photo tex 3: VELUX House is one out of several examples from the VELUX Group for sustainable buildings of the future. Previously it served as the official exit building from the COP 15 UN Climate Change Conference in Copenhagen, but now it will remain in La Rochelle.
About the VELUX Group
The VELUX Group holds the title sponsorship of VELUX 5 OCEANS for the second time. The spirit, values and nature of the race and its skippers are similar to those of the VELUX Group. As a manufacturer of roof windows, the VELUX Group employs creativity and an in-novative approach to the development of new products and business strategies. In its mis-sion to create better living environments with daylight and fresh air through the roof the Group has earned the reputation of being one of the strongest brands in the global building materials sector. The VELUX Group has manufacturing companies in 11 countries and sales companies in just under 40 countries, it has about 10,000 employees and is owned by VKR Holding A/S, a limited company wholly owned by foundations and family. For more details, visit www.velux.com.