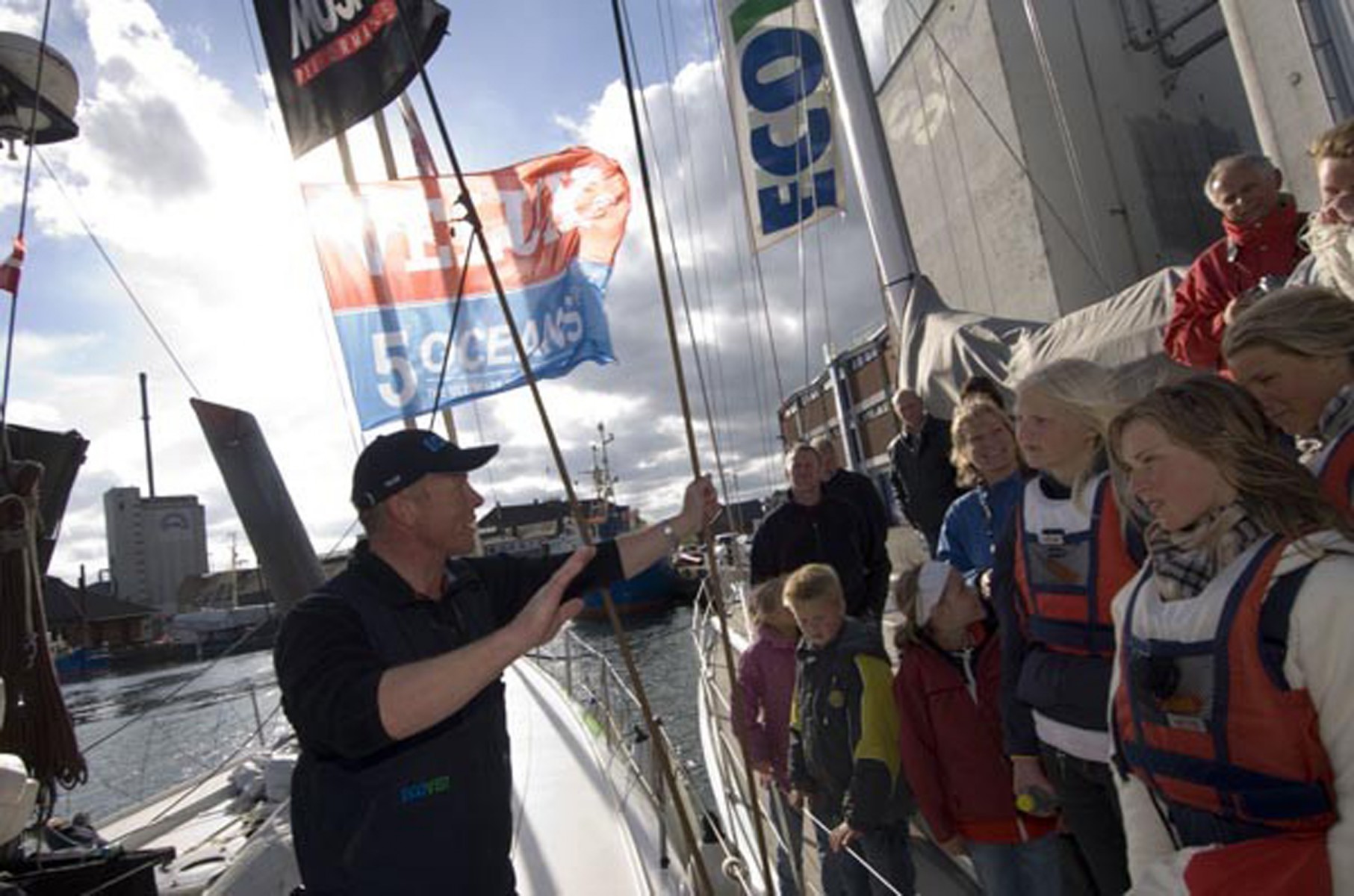 On 22 October, nine brave skippers will set out from Port Getxo in Bilbao to embark on the round-the-world race VELUX 5 Oceans, the longest and toughest event for any individual in any sport

The start of VELUX 5 Oceans is rapidly approaching. Soon the skippers will set sail for Bilbao to gather for the grand launch of the ultimate solo challenge. Port Getxo in Bilbao will be humming with activity and high expectations while the skippers make their final preparations before setting out on more than six months of rigorous sailing. Thousands of people will be at the harbour to bid the skippers farewell before they set sail round noon on Sunday, 22 October not to set foot on land until several weeks later in Fremantle, Australia.

"With beautiful sights to see and great facilities, Port Getxo and the city of Bilbao is the perfect place for the race-start of VELUX 5 Oceans. Being there, getting to see the yachts and meet the skippers in person, you get an idea of the extreme challenges they set out to meet. They are truly a special breed of men," says Michael Rasmussen, Brand Manager in VELUX.

The VELUX 5 Oceans race has an exceptional heritage in extreme sailing, staging many heroic battles against the forces of nature. Only the world's toughest and most experienced skippers will be able to complete this truly epic global adventure, 30,000 nautical miles across five oceans including the fearsome Southern Ocean.

Before the start of the race on 22 October, the skippers will be presented, the boats blessed by the Bishop of Bilbao, the final farewells made - and the starting gun will fire for this spectacular race.

The perfect match
VELUX is proud to be the main sponsor of the 5 Oceans race. The sponsorship of the round-the-world adventure fully supports the VELUX key values of daylight and fresh air. The challenges facing the skippers are similar to those facing VELUX core products - roof windows and skylights; both must endure exposure to all kinds of extreme weather.

"The sponsorship of VELUX 5 Oceans is a perfect match to our company. The challenges of the round-the-world –solo sailor and those of the VELUX products are similar, with storms, heat, blizzards, hail and other extremes of nature having to be overcome. Both are about endurance, durability and facing up to the challenge," says Michael Rasmussen.

The toughest route ever attracts only elite skippers
The 2006-07 VELUX 5 Oceans is the toughest 5 Oceans ever. With fewer stopovers and longer legs, the skippers must cross five oceans and set foot on land only twice - in Fremantle, Australia and Norfolk, USA. The first skippers are expected to cross the finishing line in Bilbao some time in May next year.

The skippers are some of the best and most experienced in the world. In 1969, Sir Robin Knox-Johnston became the first person ever to sail single-handed non-stop around the world. Now at 67, he will compete in this year's VELUX 5 Oceans. However, he will face tough competition. Nine great skippers, among them such renowned names in sailing as Bernard Stamm from Switzerland, and Alex Thompson and Mike Golding both from the UK, all come well prepared and ready to compete for the victory. VELUX 5 Oceans is exclusively for the toughest and most resourceful skippers in the world.

For more about VELUX and VELUX 5 Oceans go to:
www.velux.com
www.velux5oceans

VELUX 5 Oceans
VELUX 5 Oceans is recognised as the longest and toughest sporting event for an individual – single-handed across five oceans in thoroughbred racing yachts through the most extreme weather nature can throw at them. This year the race is even tougher, with fewer stops and longer legs. The race starts October 22 in Bilbao, Spain and stretches across three legs with stopovers in Australia and USA. The race will take the contestants through the world's most feared and legendary waters, including the treacherous, ice-cold and unpredictable Southern OceanSea. When the cross the finishing line in Bilbao the contestants will have endured more than 30,000 nautical miles. Only 126 intrepid sailors have ever sailed solo around-the-world. To put this in perspective, more than 400 astronauts have ventured into space and more than 1,200 climbers have conquered Everest. VELUX 5 Oceans is only for the world's toughest and most skilful sailors. Nine skippers have entered VELUX 5 Oceans 2006-07.

The VELUX sponsorship
In 2006, VELUX is the main sponsor of the 5 Oceans race for the first time. The sponsorship of the around- the-world adventure fully supports the VELUX key values of daylight and fresh air. The challenges facing the skippers are similar parallel to those facing VELUX core products - roofwindows and skylights; they are both exposed to all kinds of weather. VELUX products must always deliver the very best under all conditions –cold, storms, dry spells and blizzards – so must the skippers. Quality, technology and endurance are the key words. (NB – this is almost identical to 'the perfect match' on the previous page) VELUX 5 Oceans matches the VELUX brand, values, strategies and markets. The company works with daylight in buildings and thus with the importance of the natural environment for the well-being of human beings. Both VELUX and the skippers have set the goal of mastering the elements and both are committed to pushing back boundaries.

"Sailing is about daylight and fresh air. Wind is the common denominator. In fact we offered the skippers a visit to our wind tunnel, the largest in Northern Europe, where we test new VELUX products before they are introduced to the market. If the skippers needed a reminder about the ferocity of winds of more than 40 knots and accompanying rain, they would certainly get one here," says Michael Rasmussen.

Facts about VELUX
VELUX creates better living environments with daylight and fresh air through the roof. Our product programme contains a wide range of roof windows and skylights, along with solutions for flat roofs. In addition, VELUX offers many types of decoration and sun screening, roller shutters, installation products, products for remote control and thermal solar panels for installation in roofs. VELUX, with manufacturing companies in 10 countries and sales companies in just under 40, is one of the strongest brands in the global building materials sector and its products are sold in most parts of the world. The VELUX Group has around 9,000 employees and is owned by VKR Holding A/S, a limited company wholly owned by foundations and family. The main shareholders are the non-profit VELUX foundations. For more details go to www.velux.com.

Facts about the skippers
Alex Thomson, 31 (UK) Regarded by many as a major talent in international yachting. His first place in the 1998-1999 Clipper Race made Alex the youngest skipper ever to win a round-the-world yacht race. Among the highlights of his career are a record in the 2000 Round Britain & Ireland Race and a 24hr solo monohull world speed sailing record in 2003 Defi Atlantique solo transatlantic race.

Kojiro Shiraishi, 39 (Japan) His passion for sailing dates back to his youth when he was inspired by the achievements of Yukoh Tada, a famous Japanese sailor. In 2002-03 Kojiro entered the international racing scene, finishing fourth in the Around Alone race and winning the Harry Mitchell trophy. Following his success in the Around Alone Race, Shiraishi is working hard to prepare for the 2006 VELUX 5 Oceans with a professional international team based in France.

Mike Golding, 46 (UK) The first person ever to sail both ways round the world and renowned as one of the world's best offshore racing sailors. VELUX 5 Oceans is the only event he has not completed in his remarkable sailing career. Mike will be looking for the ultimate success – to win an international solo round the world race.

Tim Troy, 48 (USA) An experienced sailor who has crossed more than 100,000 ocean miles of ocean. Tim's interest in solo racing peaked after a chance meeting with the late great American solo sailor Mike Plant. From that point on, Tim was bitten by the solo bug, and feels that he will not rest until he has completed a solo around the world race.

Unai Basurko, 32 (Spain) Started sailing in early childhood and is now considered a very promising name in Spanish yachting. In his career he has taken part in more than 500 races and several ocean regattas sailing more than 100,000 miles. In 2004 he set a new record, sailing non-stop around the Iberian Peninsula, from Bilbao to Barcelona in only 15 days.

Bernard Stamm, 42 (Switzerland) Debuted as a professional skipper in 1990 after working as a lumberjack for more than 10 years. Bernard holds an impressive record of achievements in extreme sailing and won the 2002/3 edition of VELUX 5 Oceans - Around Alone. This time he wants do defend his title.

Doug Hoffman, 48 (USA) A computer technician by profession, Hoffman was trained on Lake Superior in Minnesota. He works hard to prepare for his lifelong dream - a solo around the world race. He started his racing career in 1995 in the Street Stocks Race. In 2003 he finished fifth in Path Valley Championship Points with one win at Path Valley and one win at Hill Valley.

Graham Dalton, 53 (New Zealand) The first skipper to enter the VELUX 5 Oceans after he had to withdraw from the last 5 Oceans, when he was dismasted off Cape Horn. For Dalton, the race is much more than a challenge of circumnavigation – it is a personal tribute to his son Tony, 23, whom he lost last year after a battle with germ cell cancer.

Sir Robin Knox-Johnston, 67 (UK) In 1969 he became the first person ever to sail single-handed non-stop round the world. It took him 312 days to complete the journey. He has many ocean racing successes over the years, including winning the Jules Verne Trophy with Peter Blake for the fastest non-stop circumnavigation of the world in 74 days. He was also proclaimed the International Yacht Racing Union World Sailor of the Year in 1994 and was twice UK Yachtsman of the Year. In 1995, he was knighted for his many achievements and services to the United Kingdom. He embarks on the VELUX 5 Oceans with the ambition to complete the race in just 112 days.

Facts about the yachts
The boats competing in VELUX 5 Oceans are IMOCA open 50' and 60' racing yachts, the Formula One of mono-hull racing. They are thoroughbred racing machines, fitted out to be sailed by just one person and designed to be as light and fast as possible, at the same time as being strong enough to withstand the worst onslaughts of the sea. The skippers of these racing machines will spend most of their time in the navigation work station. This is the nerve centre, packed with cutting-edge technology. But make no mistake about it - the solo skippers will be working hard all the time to match the sails to the wind and sea conditions. When you are alone at sea in the worst imaginable weather conditions with your life at stake, it is crucial that your boat is trimmed to match the conditions – getting caught in a storm with a huge balloon of sail still up is inviting disaster.

Did you know that …