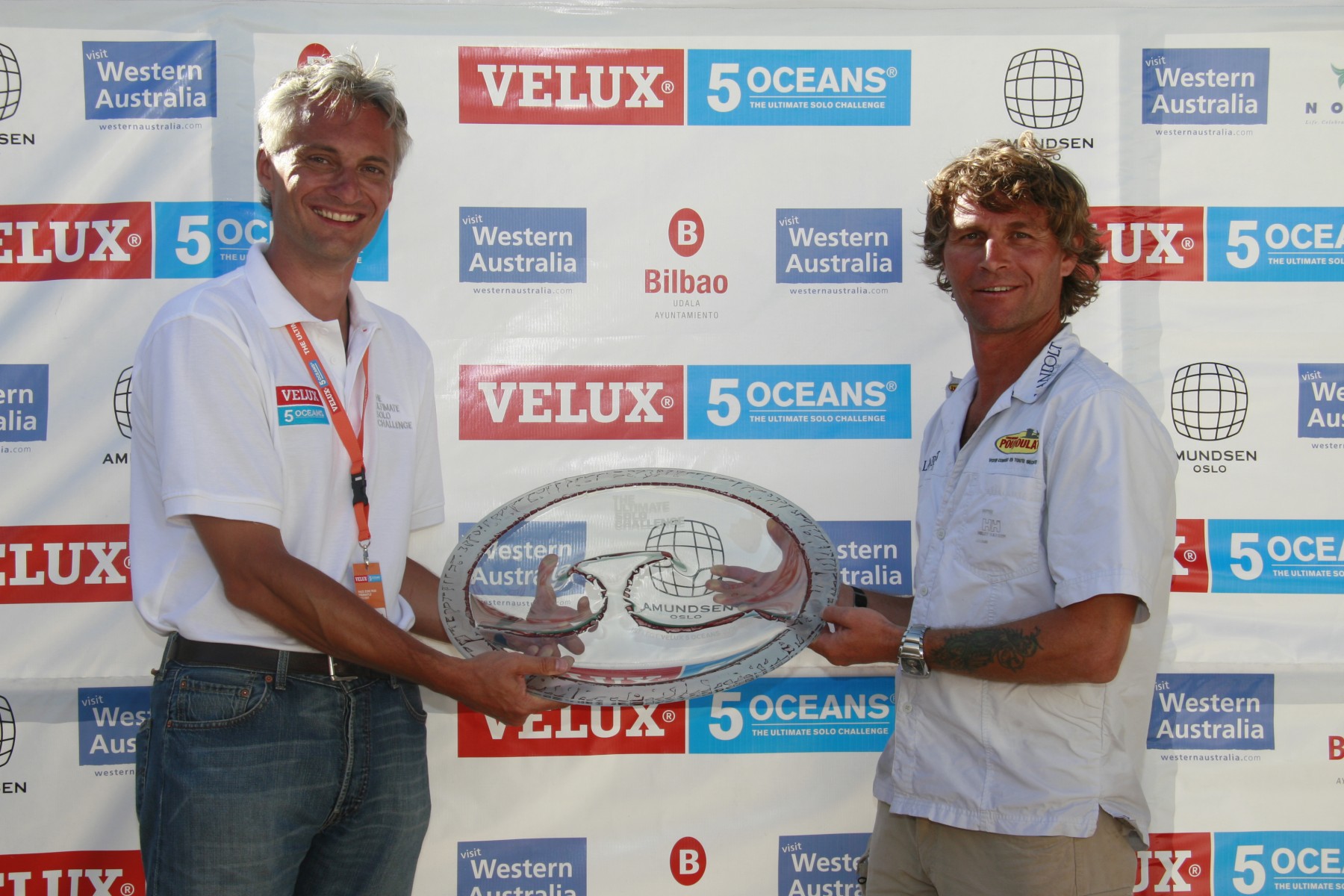 In Fremantle, Australia, Swiss skipper Bernard Stamm was today formally declared the winner of the first leg of the VELUX 5 OCEANS round-the-world race.

The trophy was handed over by VELUX Australia General Manager Marc Haseler in an award ceremony at the port of Fremantle before the skippers embark on the second leg of the race.

On 4 December, Bernard Stamm was first to arrive in Fremantle after 43 days and 12,000 miles, a performance today acknowledged with the presentation of the unique glass trophy.

"I am very pleased to have won this leg. It was a really difficult leg; I had to go up the mast three times. The start in Bilbao was hard, but the toughest time was just a few days before arriving in Fremantle when I was suddenly hit by a gust of 50 to 60 knots," said Bernard Stamm.

Depicts the skippers' challenge
The trophy tells the story about the challenges the skippers face in the race, as well as showing the route around the world that they have to sail.

"The trophy tells the story about one man's battle against the elements and celebrates the beauty of the race by using hard glass together with warm copper markings and burnishing showing the route the skippers have taken over these last weeks. I am very proud today to hand over the trophy to the leg winner Bernard Stamm and wish the very best of luck to all the skippers for the next leg," said VELUX Australia General Manager Marc Haseler.

The VELUX 5 OCEANS trophy
In the early spring of 2006, the Danish artist and designer Bettina Schori accepted the invitation to create a trophy for the skippers who won the leg in VELUX 5 OCEANS. Over the last couple of months, she has been working intensely on the assignment in her Copenhagen studio.

The VELUX 5 OCEANS trophy is made of traditional window glass with copper markings and burnishing. It resembles the hull of an Open 60', the top class competing in VELUX 5 OCEANS. Bettina Schori built several models before arriving at a result she was satisfied with. Producing the final trophy was a process with several stages: first she beat and welded iron bars into a skeletal mould in the shape of a boat; then wrapped the mould in copper; then placed a plate of glass on top and put it into a kiln. At 800° C, the glass melted and gravity neatly produced a coat of glass around the copper. The glass hardened as it cooled, ready for burnishing and engraving. The trophy is mounted on a frame designed to display the features of the model and give the artistic expression Bettina Schori wanted.

The aesthetics of the glass give the trophy an expression of openness, speed and transparency, complementing the VELUX values of daylight and fresh air. The simplicity and vulnerability, the trophy tells its own story of the challenges facing the VELUX 5 OCEANS skippers – one man and his boat in a battle against the elements.

For more about VELUX 5 OCEANS and VELUX go to:
www.velux5oceans.com
www.velux.com