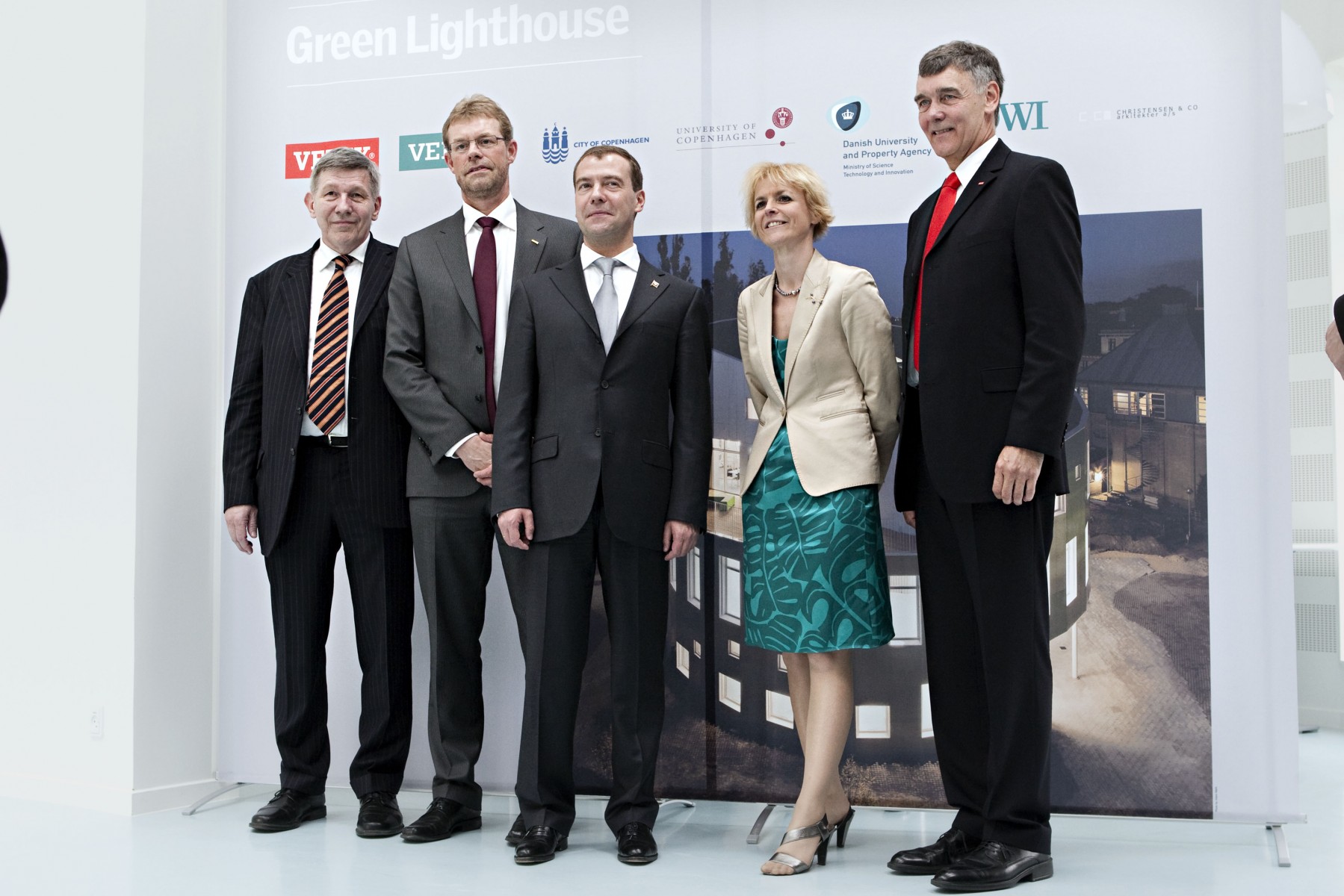 President of the Russian Federation, Dimitry Medvedev, has announced the decision to build a Green Lighthouse in Russia.

During his official state visit to Denmark, President of the Russian Federation, Dimitry Medvedev, visited Green Lighthouse, Denmark's first public carbon-neutral building. He showed great interest in it and, the next day, announced the decision to build a Green Lighthouse in Russia.

One of the first concrete results of the official Russian state visit last week is that President Medvedev is to build a Green Lighthouse in Russia. Green Lighthouse is Denmark's first official carbon-neutral building. With its innovative and climate-friendly energy concept, the building has once again man-aged to draw attention to Danish expertise in sustainable building and to an award-winning demon-stration of public-private teamwork.

Green Lighthouse is the green beacon of Copenhagen University. Here students of the Faculty of Natu-ral Sciences receive guidance about their courses and researchers gather to swap experience and ideas.

"We are both proud and delighted that Green Lighthouse is now to be built in Russia. Copenhagen University has set itself the objective to become one of the greenest campuses in Europe. And Green Lighthouse is making an enormous contribution. The building is a wonderful example of what can be achieved when the public and private sectors work together at the same pace," proclaims Rector Ralf Hemmingsen.

Climate and Energy Minister Lykke Friis says:
"I am thrilled about the Russian interest in the concept. It confirms that Denmark has a strong position when it comes to building energy-efficient housing. Homes account for 40 per cent of all Danish energy consumption, so the knowledge we possess will be a huge asset in the years to come, when we have to cut our energy consumption on a continual basis. Green Lighthouse shows that it is possible to construct the energy-friendly buildings of tomorrow with the technology of today."

Building of the future
"As one of the largest building owners in the country, it is important for the Ministry of Science, Tech-nology and Innovation to focus on and encourage energy-efficient building. It is fantastic that a sus-tainable building such as Green Lighthouse, which has been a source of inspiration to the building sector in Denmark, has also inspired such a great nation as Russia to build green," comments Minister of Science Charlotte Sahl-Madsen.

"It was incredibly exciting to speak with the President of Russia about the green challenge. Naturally, we are delighted to be able to contribute with our knowledge and experience in this field. Green Light-house is a clear demonstration that we can construct climate-friendly buildings with a good indoor climate and masses of daylight and fresh air with the knowledge and the products we already have today," says Jørgen Tang-Jensen, CEO of the VELUX Group.

Mayor of Copenhagen Frank Jensen is also enthusiastic about the Russian interest in Green Lighthouse:
"Copenhagen must be known for its use of cutting-edge, green technology, developed as a result of inter-disciplinary teamwork. The Russian interest in Green Lighthouse is a signal to Copenhagen that we are among the world leaders. That is an excellent point of departure from which to attract invest-ment and alliance partners from home and abroad to take part in visionary and green urban develop-ment projects. "

Sidebar:
Green Lighthouse – a beacon for the climate issueGreen Lighthouse is Denmark's first official carbon-neutral building. It was built in a strategic partnership between the University of Copenhagen, the VELUX Group, VELFAC, the Danish University and Property Agency and the Municipality of Copenhagen. The building shows that it is possible to build the carbon-neutral buildings of the future, with masses of daylight benefiting user health and well-being, without compromising on design, comfort, indoor climate. Green Lighthouse has the sun at its focal point and primary source of energy. The 950-m2 building has its own energy supply consisting of a unique combination of solar energy, heat pumps and district heating.

Its energy concept and visionary architecture have resulted in a 75 per cent saving in energy com-pared to the building standards of today. The building was designed by Christensen og Co Arkitekter A/S, with COWI as consulting engineers, and built by Hellerup Byg.